The primary change in our project since winter has been moving slightly away from Venetian medieval cryptographic devices and focusing on European medieval cryptology in general, as the information about our initial topic appeared to be quite scarce.

Also, we didn’t find much information about actual devices that have been used by medieval cryptographers (there is only one existing device so far we are going to implement), so we are also planning to develop nice visualizations of cryptographic algorithms of that era and demonstrate the evolution of polyalphabetic ciphers over time. The device chosen is the Alberti Cipher Disk, upon which all later variations of the cipher disk (such as the one shown below from the US Civil war) are based. 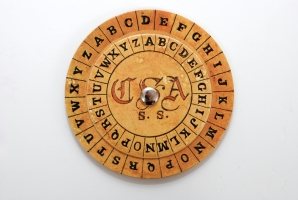 We are using MediaWiki to store the information on the backend and allow for further contributions to the project. The frontend side of the project is going to consist of a web interface on a separate website. The information is going to be pulled off of the wiki and served in the web interface along with other relevant media for the project, such as algorithm implementations, interactive cryptographic devices and a cryptographic timeline. This approach will allow us to separate the content serving from the actual user contributions. We are keeping the wiki as a means for users to suggest edits to our content, while the overall interface of the project will differ from wiki.

We have already set up the wiki project page on DHLAB Wiki, and are beginning to fill it with information from various sources about different cryptographic ciphers and algorithms, as well as their creators. The main source of the information so far is mainly English Wikipedia and various websites about cryptography, but we are thinking about taking the relevant data from books as well: “The Code Book” by S.Singh and “Codes: The Guide to Secrecy From Ancient to Modern Times” by R. Mollin to name a few. At the moment we cannot give free access to the wiki, but you can get the general picture from the screenshot presented below. 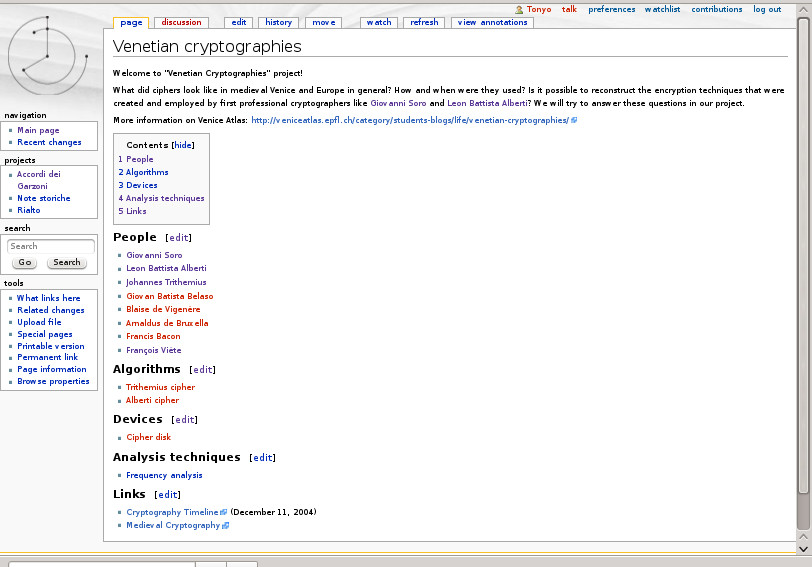 With respect to the focus change as described earlier, the project follows its milestones successfully so far. We hope that we will make it possible for others to contribute to our wiki and the project in general (for example, this includes testing of algorithm implementations) before the end of the semester.